Pterophyllum is a small genus of freshwater fish from the family Cichlidae known to most aquarists as “Angelfish”. All Pterophyllum species originate from the Amazon River, Orinoco River and Essequibo River basins in tropical South America. The three species of Pterophyllum are unusually shaped for cichlids being greatly laterally compressed, with round bodies and elongated triangular dorsal and anal fins. This body shape allows them to hide among roots and plants, often on a vertical surface. Naturally occurring angelfish are frequently striped longitudinally, colouration which provides additional camouflage. Angelfish are ambush predators and prey on small fish and macroinvertebrates. All Pterophyllum species form monogamous pairs. Eggs are generally laid on a submerged log or a flattened leaf. As is the case for other cichlids, brood care is highly developed. 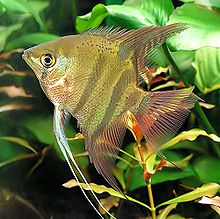 The freshwater angelfish was first talked about by Lichtenstein in 1824. Being scientifically named Pterophyllum scalare (pronounced: Ter’-o-fill”um ska-la’re), the meaning of Pterophyllum is “winged leaf”.

It was not until the late 1920s to early 1930s that the angelfish was bred in captivity in the United States.

In 1963 another species of Pterophyllum were discovered, P. leopoldi, this species was described by Gosse. In the beginning they were first described under another name, with P. leopoldi becoming the valid scientific name. Prior to that a species by the name of Pterophyllum altum had been discovered in 1906 by Pellegrin. There may still be undiscovered species in the Amazon River. New species of fish are discovered with increasing frequency, and, like P. scalare and leopoldi, the differences may be subtle. Scientific notations describe the P. leopoldi as having 29–35 scales in a lateral row and straight predorsal contour. Whereas, the P. scalare is described as having 35–45 scales in a lateral row and a notched predorsal contour. The leopoldi show the same coloration as scalare. Leopoldi can show a faint stripe between the eye stripe and the first complete body stripe and a third incomplete body stripe between the two main (complete) body stripes that extends three-fourths the length of the body. Whereas, the scalare’s body does not show the stripe between the eye stipe and first complete body stripe at all, and the third stripe between the two main body stripes rarely extends downward more than a half inch, if even present. The leopoldi fry develop three to eight body stripes, with all but one to five fading away as they mature, whereas scalare only have two in true wild form throughout life.